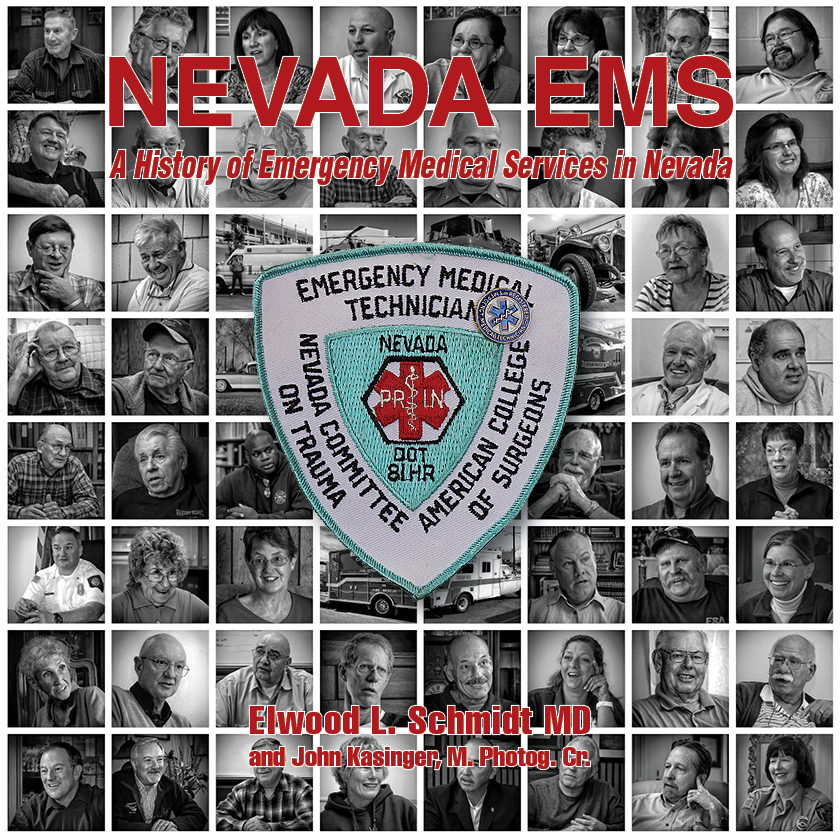 A History of Emergency Medical Services in Nevada

This book is my history of EMS development in Nevada.

It is not THE history of EMS in Nevada.

This book is not a pearl. A pearl forms when a speck of sand irritates the inside of an oyster. The oyster responds by adding layers of secretions to the grains, and therefore makes a pearl. This book is that grain of sand.

I want those who look at the book and say…

to write that story and collect and record those stories that I missed, or couldn’t include.

Every department should have its own history and tell its own story.

There are a lot of pearls in Nevada, along with our gold, and silver, and our mountains, and our sagebrush.

Here are a few stories I compiled after the book was published. Please contact me if I’ve missed your story.

Dale is a Battle Mountain High School graduate who became a Corpsman in the service. He left the service and settled in Elko in 1988. At that time a corpsman could “challenge” the EMT exam, which he did successfully. However, he then let his certification lapse. At the instigation of Bill Webb he retrained and got his EMT I and later his EMT II certification. He has been closely involved with the mine rescue service with Cortez of Barrick. Mine rescue work requires knowledge of HazMat, Fire fighting skills, Rope and other rescue skills and EMS skills. There are mine sites near Elko where 1700-1800 people are working during a day in strenuous conditions so about 70% of the work is medical Dale also works on the Elko County Ambulance and with the Wells Volunteer department! He is divorced, as he notes many of his mine rescue colleagues are. He believes he is a “trauma junky”.

The large mining operations are quite safety conscious and strongly support the mine rescue services in all ways. There are 38 AED’s on site at the Cortez mine. Dale has seen the advances in equipment and protocol changes over the years, almost always for the better. He is particularly fond of the hydraulic gurneys and the new stair chairs that make removal of immobilized patients from tight spaces, e.g. mobile homes much easier. Mast suits are still carried on the ambulances and are occasionally used to stabilize fractures.

A memorable run for him occurred with Teresa Doherty to see an 8-year-old boy thrown from a horse and kicked by the horse on his way down. The child was severely damaged and he and Theresa worked vigorously on the child and saw him flown out to care. They were not hopeful for the outcome but he was gratified to have the parents come up to him in public one time with the boy along and showed him the successful outcome of their efforts. The tribulations of problems encountered in EMS work are considered as part of the business. Crib deaths bother him but he makes it a point to focus on the parents and support them at the time of the episode

Temple is a native of Texas who grew up in Hawthorne, NV.  Her father, a former US Navy corpsman, was the lab and x-ray technician at Mt. Grant Hospital in Hawthorne.  Temple was fascinated from early youth onward with the medical equipment and environment and “hung around” her father’s lab and the hospital.  She took EMT classes in Mina and then Hawthorne and subsequently taught EMT classes.  As a member of the Mineral County VFD she attended patients, very often with Mike Callenbar.  On one occasion they called in Care Flight for transport of a 2-year-old.  She was impressed by the flight crew’s competence and knowledge. That event inspired her to continue her education and training at every opportunity.  She had a two-year job related detour to Jackpot, NV., where she was a member of the volunteer department and participated in many transfers of people to the Twin Falls, ID. Hospital.  Subsequently she moved to Reno, took EMT-Intermediate training at Fallon and then taught EMT classes at Truckee Meadows Community College for Kerry Swinney, along with Dave Fogerson, John Gillenwater, and John Mohler.  She continues to teach various classes to the present. 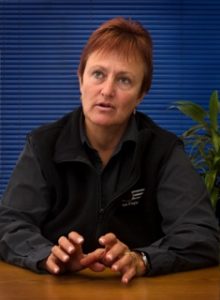 Dick Swinney operated CentraComm, a centralized dispatch and Air ambulance coordination.  He hired her to work dispatch and she along with Bill Denniston were in dispatch during some of the times of intense competition between ambulance services mentioned frequently in discussions of EMS development in the Truckee Meadows.  Three companies were in competition for paying patients, Medic I Paramedics, AES, and AIDS ambulance.  In the ’80-‘81 time period Flight for Life came from Colorado with Maggie Tole and Jane Miller being the flight nurses.  Temple joined the flight team as an EMT-Intermediate and continued as a paramedic after getting her paramedic training from REMSA in 1990.  She has been Care Flight Program Director since Maggie Tole’s retirement from the position in 2010.

She does not single out any notable calls from her multitude of memories, but is proud of the time she spent as a volunteer paramedic at the 2002 Salt Lake City Olympics.  There she trained daily with National Guard and with air paramedicine personnel from all over the country, but they never had to respond to a live call.

Temple is active in the Critical Incident Stress Management Network.  A Critical Incident is any event that has sufficient emotional power to challenge a person’s ability to cope.  This is an all volunteer network providing support for people throughout the police departments, fire departments, and ambulance services that are exposed frequently to human tragedies.  These services are without charge and provide succor not otherwise available.

Barb was an Oregon native who began her career as an EMT in 1974 and worked on an ambulance while in Nursing School   She moved to Nevada in 1983 and worked at Washoe Medical Center where she became the EMS Liaison Nurse.  Barb taught courses in rural northern Nevada to many volunteers and worked part-time on the ambulance with the inception of REMSA.  She started and directed the first paramedic program in Reno at Truckee Meadows Community College and wrote the first program for EMS RN in Nevada which was adopted by the Nevada State Board of Nursing as well as the Nevada State EMS Division and Clark County EMS.  She worked as the Education Manager for REMSA until 1995 when she was recruited to be the EMS Clinical Director for Mercy Ambulance in Las Vegas.  Barb was always interested in Flight, so in 1998 she went to work at Valley Hospital Flight for Life where she was instrumental in developing a curriculum for cross training paramedic to be the second crew member on a previously single nurse helicopter.  The transfer of her spouse took her to Texas for a few years where she worked as a flight nurse, but her roots were in Reno, so she returned in 2003 to work for Care Flight.  Barb is currently the Care Flight Clinical Educator and still works on the helicopter, fixed wing and ground critical care transport and in the 911 system occasionally.  Barb teaches courses to many local EMS agencies and nationally with Air and Surface Transport Nurses Association.

If you would like to submit an article about you or another individual who should have been in the original publication, please email me.